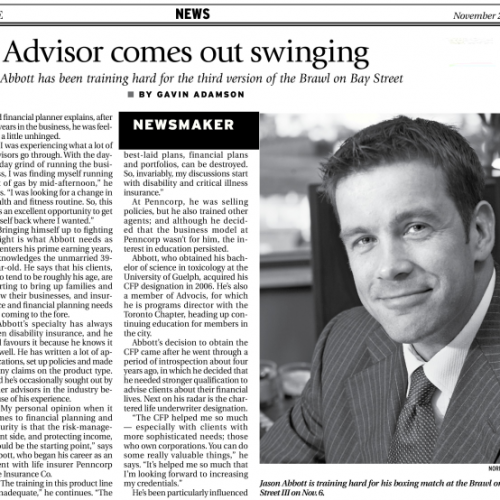 By Gavin Adamson
Published on Nov 2008

A little wooziness might be common for the average advisor these days, but Jason Abbott admits his symptoms have a more concrete cause: namely the barrage of punches to his noggin that he’s been taking lately.“I wouldn’t say it’s quite a headache,” says the owner of Abbott Group Insurance Advisors in Toronto, “but I feel a little light-headed.”

The independent advisor who runs his insurance business through Desjardins Financial Security’s independent channel, admits his sparring partner in the previous night’s training session took the best of him — but it’s a necessary punishment.

There are only a few sparring sessions left before Abbott takes to the canvas in the Brawl on Bay Street, a series of six bouts scheduled for Nov. 6 at the Arcadian Court in Toronto. The Brawl is a charity event that pits Bay Street professionals against each other in the boxing ring to raise money for the Believe to Achieve Youth Success Outreach Program for at-risk children in the Greater Toronto Area. It’s the third brawl event in a little less than a year.Abbott saw the most recent event this past April and decided it was just what he needed. He liked the atmosphere at the event, and being in the ring trading jabs and hooks looked like fun. Besides, the certified financial planner explains, after 11 years in the business, he was feeling a little unhinged.

“I was experiencing what a lot of advisors go through. With the day-to-day grind of running the business, I was finding myself running out of gas by mid-afternoon,” he says. “I was looking for a change in health and fitness routine. So, this was an excellent opportunity to get myself back where I wanted.”

Bringing himself up to fighting weight is what Abbott needs as he enters his prime earning years, acknowledges the unmarried 39-year-old. He says that his clients, who tend to be roughly his age, are starting to bring up families and grow their businesses, and insurance and financial planning needs are coming to the fore.

Abbott’s specialty has always been disability insurance, and he still favours it because he knows it so well. He has written a lot of applications, set up policies and made many claims on the product type. And he’s occasionally sought out by other advisors in the industry because of his experience.

“My personal opinion when it comes to financial planning and security is that the risk-management side, and protecting income, should be the starting point,” says Abbott, who began his career as an agent with life insurer Penncorp Life Insurance Co.

“The training in this product line is inadequate,” he continues. “The best-laid plans, financial plans and portfolios, can be destroyed. So, invariably, my discussions start with disability and critical illness insurance.”

At Penncorp, he was selling policies, but he also trained other agents; and although he decided that the business model at Penncorp wasn’t for him, the interest in education persisted.

Abbott, who obtained his bachelor of science in toxicology at the University of Guelph, acquired his CFP designation in 2006. He’s also a member of Advocis, for which he is programs director with the Toronto Chapter, heading up continuing education for members in the city.

Abbott’s decision to obtain the CFP came after he went through a period of introspection about four years ago, in which he decided that he needed stronger qualification to advise clients about their financial lives. Next on his radar is the chartered life underwriter designation.

“The CFP helped me so much — especially with clients with more sophisticated needs; those who own corporations. You can do some really valuable things,” he says. “It’s helped me so much that I’m looking forward to increasing my credentials.”

He’s been particularly influenced by advisor Mark Halpern, the critical illness insurance specialist in Markham, Ont., and Lawrence Ian Geller of Campbellville, Ont., another veteran advisor who Abbott quotes occasionally as a sort of mantra.

Abbott likes to apply Halpern’s so-called “crash test” to prospects and clients in his own practice. As part of the test, he asks clients to consider major risks in their lives and how personal injuries, disability and loss would affect them, their families or their businesses. (See story page B17.)

“Usually, business owners are too busy doing what makes them money to consider risks,” he says. “You try to interrupt their usual pattern. You focus on the most immediate risk that would help them understand how it has an impact on their businesses tomorrow.”