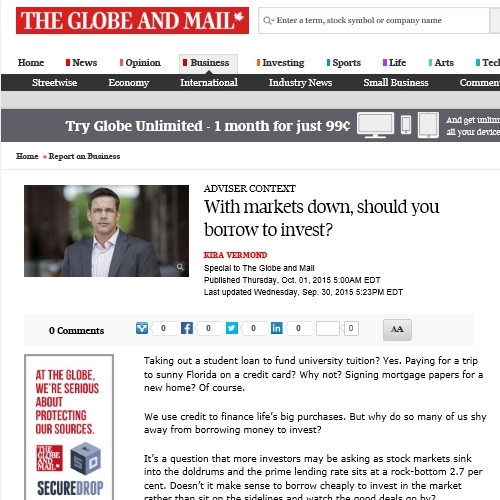 Taking out a student loan to fund university tuition? Yes. Paying for a trip to sunny Florida on a credit card? Why not? Signing mortgage papers for a new home? Of course.

We use credit to finance life’s big purchases. But why do so many of us shy away from borrowing money to invest?

It’s a question that more investors may be asking as stock markets sink into the doldrums and the prime lending rate sits at a rock-bottom 2.7 per cent. Doesn’t it make sense to borrow cheaply to invest in the market rather than sit on the sidelines and watch the good deals go by?

While borrowing – or leveraging, as it’s known in investor-speak – has the potential to boost returns, taking on this kind of debt can be risky, even in the best (read: worst) of times, says Jason Abbott, the principal financial planner at WEALTHdesigns.ca Inc. in Toronto.

In a perfect world, borrowing to invest during a market downturn makes a lot of sense. You could dip into your line of credit, paying only 3.2 per cent interest, then invest the money in a quality company that’s experiencing a drop along with everyone else. Once the stock goes back up, you pay off the loan and make a pretty penny, too.

But this isn’t a perfect world.

Maybe you bought before the stock hit bottom and the investment loses money. Maybe you’re hoping it will rebound, but it doesn’t, and soon it’s time to pay the loan back, plus all the interest accrued during the wait-and-see period.

If you bought on margin, it gets worse. Not only do you lose more than you invested, you’re faced with a margin call – you have to top up your account to meet your investment firm’s requirement that you have money to cover the loan. The firm could even decide to sell a portion of your shares to cover the margin call. You lose more than just money – you lose control over your own investments.

Even if the investor does manage to make money on the investment, it’s not free-and-clear cash, he continues. He or she must pay trading commissions, as with any other investment, as well as interest on the loan. And even though many non-registered investments are eligible for a tax deduction on such interest, it’s a reduction, not a wash.

“When you add a layer of leverage you’ve got a headwind that’s pushing you back with that constant interest rate you have to pay,” Mr. D’Souza says.

Even so, in some cases, borrowing to invest might make sense, says Mr. Abbott, who says he has used leverage himself, though with a more conservative approach. The trick is to avoid margin loans, he says, and use loans that are independent from the investment – that line of credit, for instance – so no one is forcing you to sell before the stock bounces back. It also helps to borrow in small increments and pay the loan back quickly.

Aaron Keogh, president and financial adviser at Greendoor Financial Inc. in Windsor, Ont., says some of his clients made money using a leveraging strategy during the 2008-09 downturn, as long as they waited until the market was at its lowest when they got in. He is not convinced, however, that today’s lacklustre markets have declined enough to offer an enticing enough opportunity for leveraging.

“Companies are a little less expensive to buy today than they were, say, a couple of months ago, but historically they’re not that inexpensive right now,” Mr. Keogh says.

Ultimately, the decision to borrow depends more on the investor, not what the market is doing. How secure is the investor’s job? Does he or she have excess cash to pay a margin if needed? Is he or she prone to panic selling? Investors must answer these questions before taking out a loan.

But Mr. D’Souza says the soul searching should go even deeper than that. Poor financial management could be to blame for wanting to make such a risky move, especially if it’s in hopes of reaping a short-term gain.

“If you’re thinking about jumping into the market with borrowed money, the first question should really be: ‘Why don’t I have any cash on hand when I want to invest?’” he says. “You should really deal with that first.”