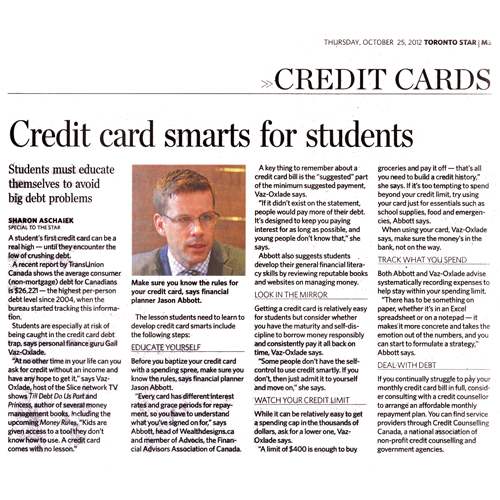 Students must educate themselves to avoid big debt problems

A student’s first credit card can be a real high — until they encounter the low of crushing debt.

A recent report by TransUnion Canada shows the average consumer (non-mortgage) debt for Canadians is $26,221 — the highest per-person debt level since 2004, when the bureau started tracking this information.

Students are especially at risk of being caught in the credit card debt trap, says personal finance guru Gail Vaz-Oxlade.

“At no other time in your life can you ask for credit without an income and have any hope to get it,” says VazOxlade, host of the Slice network TV shows Till Debt Do Us Part and Princess, author of several money management books, including the upcoming Money Rules. “Kids are given access to a tool they don’t know how to use. A credit card comes with no lesson.”

The lesson students need to learn to develop credit card smarts include the following steps:

EDUCATE YOURSELF
Before you baptize your credit card with a spending spree, make sure you know the rules, says financial planner Jason Abbott. “Every card has different interest rates and grace periods for repayment, so you have to understand what you’ve signed on for,” says Abbott, head of Wealthdesigns.ca and member of Advocis, the Financial Advisors Association of Canada. A key thing to remember about a credit card bill is the “suggested” part of the minimum suggested payment, Vaz-Oxlade says. “If it didn’t exist on the statement, people would pay more of their debt. It’s designed to keep you paying interest for as long as possible, and young people don’t know that,” she says. Abbott also suggests students develop their general financial literacy skills by reviewing reputable books and websites on managing money.

LOOK IN THE MIRROR
Getting a credit card is relatively easy for students but consider whether you have the maturity and self-discipline to borrow money responsibly and consistently pay it all back on time, Vaz-Oxlade says. “Some people don’t have the selfcontrol to use credit smartly. If you don’t, then just admit it to yourself and move on,” she says.

WATCH YOUR CREDIT LIMIT
While it can be relatively easy to get a spending cap in the thousands of dollars, ask for a lower one, VazOxlade says. “A limit of $400 is enough to buy groceries and pay it off — that’s all you need to build a credit history,” she says. If it’s too tempting to spend beyond your credit limit, try using your card just for essentials such as school supplies, food and emergencies, Abbott says.
When using your card, Vaz-Oxlade says, make sure the money’s in the bank, not on the way.

TRACK WHAT YOU SPEND
Both Abbott and Vaz-Oxlade advise systematically recording expenses to help stay within your spending limit.
“There has to be something on paper, whether it’s in an Excel spreadsheet or on a notepad — it makes it more concrete and takes the emotion out of the numbers, and you can start to formulate a strategy,” Abbott says.

DEAL WITH DEBT
If you continually struggle to pay your monthly credit card bill in full, consider consulting with a credit counsellor to arrange an affordable monthly repayment plan. You can find service providers through Credit Counselling Canada, a national association of non-profit credit counselling and government agencies.