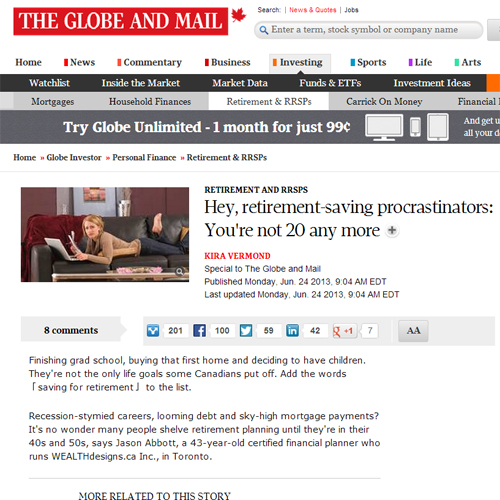 by KIRA VERMOND
Special to The Globe and Mail
Published Jun. 24, 2013

Finishing grad school, buying that first home and deciding to have children. They’re not the only life goals some Canadians put off. Add the words “saving for retirement” to the list.

“Everyone puts it off. It’s the ostrich-in-the-sand approach,” he says. “It’s really tough to talk about retirement with someone in their 30s if they haven’t gotten to the stable point of purchasing a home and having a career. Retirement is just so far away.”

It may also seem like some other generation’s dream from a more lucrative time. According to a recent study from the Employee Benefit Research Institute in Washington, D.C., confidence in the ability to afford a comfortable retirement is at record-low levels, despite signs of economic recovery south of the border. In Canada, a recent Canadian Imperial Bank of Commerce report states that although 60 per cent of Canadians intend to invest money in registered retirement savings plans and tax-free savings plans in 2013, if history repeats itself, about half won’t follow through.

Tim Simpson, a commercial sales rep for a hardwood flooring company in Calgary, says at 46, he hasn’t started saving for his retirement yet and doesn’t know whether he ever will. The son of a bank manager who diligently loaded money into RRSPs and other investments, he watched his dad’s $1.5-million shrink to $400,000 during the 2008 recession. Rather than save money himself, he buys disability, critical illness and life insurance – and plans to work unless he gets sick.

“My long-term retirement plan is that I don’t plan to retire,” he says.

Wake-up calls: Of course, not everyone feels as Mr. Simpson does. Eventually, Gen-Xers, the generation coming after the Boomers, wake up and realize they’re not 20 any more. Retirement is on the horizon. There are a number of different triggers that finally get them serious about saving.

Job switch: Many of today’s mid-career professionals are either contractors or tend to move from job to job. Although many of them don’t have pension plans, some do have employer defined contribution plans they’ve opted into. When they leave, their new employer wants to know what to do with the money they’ve already stockpiled somewhere else.

“A lot of people come in to see me and say, ‘Look, I’ve got this pool of $30,000 sitting there. What should I do with it?’ The job change prompts the discussion about future plans,” says Jonathan Sceeles, a Toronto financial adviser with Edward Jones.

The parent trap: Sometimes a conversation with a parent acts as the trigger for retirement planning, Mr. Abbott says. In short, adult children get news they don’t expect.

“They either realize the inheritance they were hoping for isn’t going to materialize or they’re going to subsidize their own parents’ retirement. It’s a wake-up call.”

The Big 4-0: Although Martha Szabo, a Kitchener, Ont., resident, has been socking away money in her RRSP since she was in her 20s – she’s an actuary, after all – she was more concerned about using the money to knock down her taxes than to build a nest egg for later. But that all changed when she hit 40.

“I guess you could call it a mid-life crisis,” she says. “It was the magic age when questions start to hit. How much do I want to live on? Have I been saving realistically for that? Turning 40 caused me to re-examine what I was doing.”

Since then she has run the numbers and believes she’ll have enough to retire on by the time she’s 57 or 58.

Well, what do you have? If there’s one thing that spurs some people to start saving, it’s peer pressure, Mr. Sceeles says. Dinner party prattle turns uncomfortable if you discover you’re the only one in the room who doesn’t know what TFSA stands for. (Tea for Sassy Aardvarks? Surely not.)

“People can be very competitive,” Mr. Sceeles explains. “A friend starts talking about what they’re doing with their investments and you suddenly realize, “Oh, he’s got a lot more money than me! Where have I been?”

(Personal) financial crisis: Whether it’s divorce, being downsized at work or a serious illness, crisis can be an impetus for change. The plan you have in your mind – that your income will increase by 15 per cent each year, you’ll pay off your house and that surplus cash can go to savings – goes out the window. The best (read: most realistic) clients tend to be the ones who have been through some kind of personal or financial crisis, Mr. Abbott says.

“If you’ve never had a hole in your roof you’ll see the shingles weather, but think you’ll deal with it later. But if you’ve had a leaky roof even once, you’re more alert. You’re ahead of the curve,”he says.

Do it now
You probably saw the ads or read the articles back when you were in your 20s. Start saving now and by the time you retire, and with a little help from compound interest, you’ll retire with a million bucks! Did you listen? Maybe not. But even if you have to play catch up now, all is not lost.

So what if you have to sock away $500 a month now instead of $200? It’s all relative, if your job pays more today than it did 20 years ago. Parting with that $500 feels like less of a financial burden. Even so, your time horizon is getting shorter. Time to start saving.