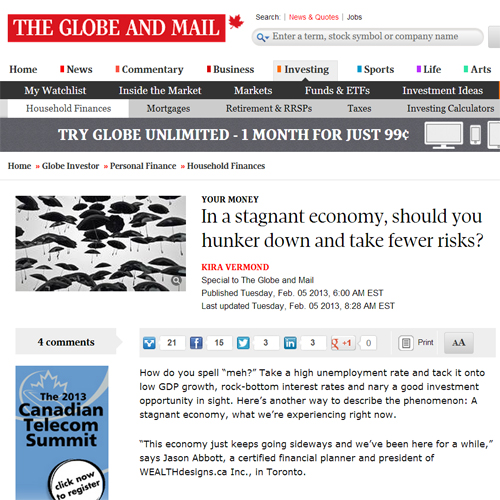 How do you spell “meh?” Take a high unemployment rate and tack it onto low GDP growth, rock-bottom interest rates and nary a good investment opportunity in sight. Here’s another way to describe the phenomenon: A stagnant economy, what we’re experiencing right now.

“This economy just keeps going sideways and we’ve been here for a while,” says Jason Abbott, a certified financial planner and president of WEALTHdesigns.ca Inc., in Toronto.

It seems economic stagnation will become the norm for some time yet without projections of a job market boom in the near future. The upshot? People will do what they normally do during sluggish times: hunker down and take fewer financial risks.

Yet according to Cary List, president and chief executive officer at the Financial Planning Standards Council in Toronto, it’s more important than ever to create a solid financial plan with a professional planner to learn how to cope.

“If you go to a certified financial planner, it’s not just to get five or six per cent on your investment. You’ve got to figure out how you’re going to make your life work with a two per cent rate of return,” he says.

Writing a financial plan makes sense when the economy seems stuck in neutral and even more so when there’s market turmoil, according to research published late in 2012 by Advisor Impact Inc., a Toronto-based research and training company. It states that 72 per cent of those who had a written plan felt they were prepared to cope with a significant market downturn. Of those who didn’t have a plan, only 59 per cent felt that confident.

Generating peace of mind will only take a person so far, though. Developing a plan is also supposed to be about taking action and getting financial results that could make the difference between retiring exhausted at 71 and hitting the golf course at 60. Here are a few questions to consider when creating a new plan, or updating the one you have, in a meh economy.

Could you lose your job this year?
One of the defining features of a stagnating economy is higher unemployment, and if the results of a recent PricewaterhouseCoopers survey of chief executives are any indication, new jobs will be a no show in 2013. Only 18 per cent of the CEOs questioned expect the economy to grow in 2013. To face this challenge, they say they’ll focus on cutting costs, including reduced hiring.

Mr. Abbott says that when he sits down with clients these days, he asks them to have an honest look at how secure their jobs are. That knowledge could change how their investment portfolio looks. For instance, a government employee with a secure pension can afford to take much more risk with their investments than someone working in a tenuous industry or struggling company.

How much debt do you have?
With a debt-to-income ratio of a record-high 165 per cent, many Canadians would do well to pay off as much debt as they can, particularly if the interest on that debt runs into the double-digits. When GICs are earning only two or three per cent, why keep a credit card balance costing 20 per cent? Net worth isn’t just about accumulating assets, it’s about debt elimination, too.

Are you being honest about retirement?
Kathryn Jankowski, a certified financial planner and vice-president of T.E. Wealth in Toronto, says one of the biggest mistakes people make when creating a financial plan is not checking it often enough to be sure they’re on the right track. Plans are dynamic, she says. They have to reflect changing tides.

“You don’t want to say, I did a plan back in the 1980s and I’ll be okay. Now you have 10 years of slow growth in your portfolio. It could have a serious impact on your retirement,” she says.

People who know where they stand at retirement can make changes to their lifestyle now, she says. They can decide to work a couple of years longer, try to earn more through their investments, decide to live on less while retired, or sock away more money today. Knowledge is power.

Are you fighting apathy?
“Some people say, ‘Why bother investing? There are no returns out there,’” admits Mr. Abbott. “Part of my job is to get people back in the pool and start swimming again because there are a lot of people sitting on the sidelines.”

Yes, there’s not a lot of oomph in compounding interest these days, but that doesn’t mean people should give up on investing in the first place. Even a government or corporate bond will make more than a wad of cash stuffed under a mattress. Stop waiting for the gravy days to come back. You’re going to be waiting a while.

Are you afraid to invest?
Sometimes the problem isn’t apathy. It’s fear. Perfectly understandable after watching what went down back in 2008 when some of the most seemingly safe investment opportunities went bust and numerous Canadians lost chunks of their retirement savings.

But while it’s a good thing to be cautious while the markets are still relatively volatile, fear is the last emotion you want to influence how you deal with your investments, Ms. Jankowski says. In short, fear is often instrumental in investors’ decisions to buy high and sell low. When times get tough, the impulse is to hoard money.

In truth, a downturn is the best time to invest, and those with a solid financial plan create liquidity so they can take advantage of market slumps.

“This market is not forever. It will turn again. But by the time those people sitting in low interest money-market accounts have a comfort level and invest again, they’ve probably missed a huge return,” Ms. Jankowski adds.

The trick is to find investments you feel comfortable with rather than jumping on the latest hot stock tip. Find a mutual fund that diversifies across a number of industries. Or look into mega cap stocks, high-quality global companies that offer exposure to international markets and are considered generally less volatile. There will always be risk, of course, but the return could be worth it.

“Isn’t it better to be invested even in something with a GIC return and subjecting your portfolio to a little risk, than sit on the sidelines and do nothing?” Ms. Jankowski asks.