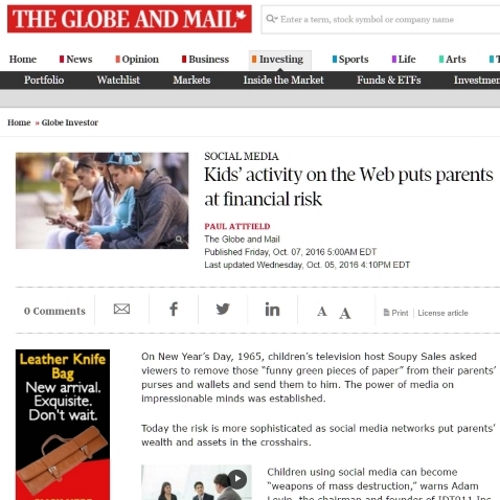 On New Year’s Day, 1965, children’s television host Soupy Sales asked viewers to remove those “funny green pieces of paper” from their parents’ purses and wallets and send them to him. The power of media on impressionable minds was established.

Today the risk is more sophisticated as social media networks put parents’ wealth and assets in the crosshairs.

Children using social media can become “weapons of mass destruction,” warns Adam Levin, the chairman and founder of IDT911 Inc., an Arizona-based cyber security threat and detection firm. He is also the author of Swiped: How to Protect Yourself in a World Full of Scammers, Phishers and Identity Thieves.

Mr. Levin calls the teenage social media generation “Gen-I,” because when they go online they rarely think about the consequences of their actions.

For instance, a teenager who posts a picture of his parents’ new car on Facebook tips off followers, not all of whom are necessarily friends. In addition, if the social media website does not scramble the geo-location, or tagging, on the photo an even bigger problem can result.

He warns parents not to allow children to disclose information about their families. He also suggests disabling location services on mobile devices, although that can be hard for people who like GPS-based pop-ups telling them where the nearest Starbucks is.

The bottom line is that wealthy people in particular must protect their privacy. Jason Abbott, a certified financial planner and president of WEALTHdesigns.ca in Toronto, says they should “operate discreetly and communicate very clearly to their kids, otherwise you’re going to be constantly putting out fires.”

“The more you have, the greater target you become.”

In particular, parents should ensure their children understand that submitting information on even the most innocuous of websites can have financial ramifications. To drive home the point, Mr. Levin tells a story about a former employee who always warned her daughter never to give up her real last name or home address.

The daughter slipped up, however, just once, on a popular website for young people.

“Eleven years later, two pre-approved credit-card offers showed up at their home,” Mr. Levin says. “One in the actual name of the daughter and the second one with the right first name and the last name ‘ain’t telling ya.’”

But sometimes it’s not the children who cause problems, it’s their friends.

If a child invites companions to a cottage for a weekend, for instance, that son or daughter may hold off posting pictures of the property to Facebook, Twitter, or another such site. But if a friend posts a picture and identifies which lake they are on, an unscrupulous individual may gain access to it, and if they had any knowledge of the lake, find the cottage. That might lead to a burglary down the line.

Social-media observers who are up to no good can piece together bits of information about a family.

“The information may not come from any one source, such as a direct approach to your child, but it may come from a constellation of sources where collectively you can put together a picture,” says Ira Nishisato, partner and national leader of cyber security and cyber risk-management at the law firm Borden Ladner Gervais LLP in Toronto.

“Through networks and social engineering it is increasingly easy to fish for information,” he says.

Non-tech-savvy parents may be surprised by the amount of information about them online. He encourages them to Google their own names to see what’s out there.

Parents must teach children about the proper use of social media, including privacy settings. “Parents really must stay informed and must be aware of what their children are doing online and who they’re dealing with online.”

Social media posts might also be checked out by other, more scrupulous people. Mr. Abbott says he wouldn’t be surprised if tax officials check social media to look for clues that would indicate tax evasion.

The same might apply to life and medical insurance policy holders, if clues are being posted about their lifestyles or vices. The more people who know a person’s identity and the wealth attached to them, the greater the dangers.

“For teenagers trying to gain acceptance, I understand why they might do this – they’re trying to impress their peers, but parents want nothing to do with it,” Mr. Abbott says.

“If you’re broadcasting to the world that you’re affluent or you have money, you’re certainly going to set yourself up for a greater risk of a frivolous lawsuit or something along those lines,” he says.

“Let’s face it, people look for those with deep pockets.”