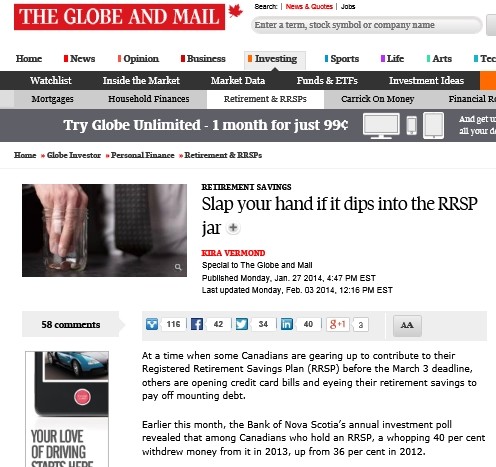 At a time when some Canadians are gearing up to contribute to their Registered Retirement Savings Plan (RRSP) before the March 3 deadline, others are opening credit card bills and eyeing their retirement savings to pay off mounting debt.

Earlier this month, the Bank of Nova Scotia’s annual investment poll revealed that among Canadians who hold an RRSP, a whopping 40 per cent withdrew money from it in 2013, up from 36 per cent in 2012.

“I’m not surprised to hear that,” says Jason Abbott, a certified financial planner and president of WEALTHdesigns.ca Inc., in Toronto. “Some people treat their RRSP like a savings account. It’s money in, money out.”

The real goal of an RRSP is to allow money to accumulate tax sheltered for as long as it remains in the plan. In order to work as it should, you put the money in when you’re in a higher tax bracket, then withdraw it when you turn 71, ideally when you’re in a lower tax bracket. But as the Scotiabank numbers show, that straight path to retirement income can turn squiggly as financial pressures mount.

The bank’s poll was conducted using Harris/Decima’s online panel. A total of 1,029 completed surveys were collected from a random sample of panel members across the country between Nov. 12 and Nov. 27, 2013.

“Many Canadians are juggling various priorities, whether it’s home ownership, trying to save for their child’s education or pay the bills. There are a lot of demands on their after-tax income,” says Chris Buttigieg, senior manager of wealth planning strategy at the Bank of Montreal in Toronto.

Home ownership, or at least the intent to own a home, is actually at the heart of why many people draw from their RRSP early. They’re taking advantage of the Home Buyer’s Plan.

First-time homeowners can withdraw up to $25,000 ($50,000 when combined with a spouse) from the RRSP without any kind of tax penalty, as long as the funds are reimbursed within 15 years. Those who use the plan must pay back a certain amount each year, usually 1/15 of the total, if they don’t want the money to be considered taxable income.

Others turn to their RRSP to pay for continuing education. The government allows a maximum of $20,000 be withdrawn through its Lifelong Learning Plan to pay for classes at an accredited university or college. It works much like the Home Buyers’ Plan, but must be paid back over a 10-year period.

While younger people may not find the plan too useful – they don’t usually have a huge RRSP to draw from – it can come in handy for those who are mid-career and either want to update their skills or are between jobs.

“These are tax effective ways to withdraw from an RRSP because you’re borrowing tax free,” Mr. Buttigieg says. “The withdrawal is not considered taxable earned income – as long as you repay it.”

Unfortunately, not everybody does. Statistics from Canada Revenue Agency (CRA) in 2013 showed that almost one-half of those using the Home Buyers’ Plan actually paid less than the required repayment amount for the 2011 tax year, when the data was analyzed.

Although Mr. Abbott admits he used the Home Buyers’ Plan himself years ago, he wouldn’t do it again, nor does he recommend it to clients now.

“I’m lukewarm on it. It sets the precedent that it’s okay to use retirement dollars for current needs,” he says.

Instead, he advises young clients who expect to need money for a down payment to load up a Tax-Free Savings Account instead, since they’re probably in a lower tax bracket anyway. By the time they need that money for a home, there’s a good chance they’ll be in a higher bracket, but that withdrawn money won’t be added to their taxable income, since the tax was paid on their earlier income.

There are other reasons raiding an RRSP doesn’t necessarily make financial sense, even for purchases that fall into the “good debt” category and will probably appreciate over time.

“If you’re withdrawing from your RRSP, you’re not benefiting from the compounding effect,” says Silvio Stroescu, ING Direct’s head of deposits and investments in Toronto. “It’s not a cost you incur in real dollars today, but it does impact the future state of your retirement.”

That’s one expensive way to finance a down payment or degree.

Unlike a TFSA, which allows investors to reload money into vacated space the following year, once RRSP contribution room is lost, it’s lost forever.

But don’t forget one of the most onerous reasons to avoid raiding an RRSP: the tax hit.

Want to take out up to $5,000? Expect to pay an automatic 10-per-cent withholding tax. Between $5,000 and $15,000 the financial institution will hold back 20 per cent, and anything more than $15,000 is 30 per cent. If you’re in a higher marginal tax bracket, you’ll probably pay even more come tax time to make up the difference between what the institution remitted on your behalf and what you really owe based on your earnings.

With numbers like these, it’s hard to fathom why anyone would want to touch the money early. Even so, in some cases, it actually makes sense.

For instance, if one half of a couple is still working and the other is retired early and not receiving Canada Pension Plan or Old Age Security yet, the retiree could withdraw $10,000 – below the federal government’s basic personal amount – and move it to the couple’s TFSAs. Once they need the money when both retire, the couple can take it out tax-free.

Another reason to dip into an RRSP: It’s the last, best chance to pay off extremely expensive debt. In other words, if you’re paying off a credit card that charges 25 per cent interest – and all other options are unavailable, such as borrowing money from family, negotiating a better rate or debt consolidation – that RRSP could get you back on your feet.

That is, as long as you don’t go and blow your money again five years later. Delaying the need for instant gratification is important.

“If someone is coming to me to raid their RRSP to buy a new sports truck, hey, I’ll honour their request. It’s their money,” Mr. Abbott says. “But I doubt we will have a long-lasting future together.”