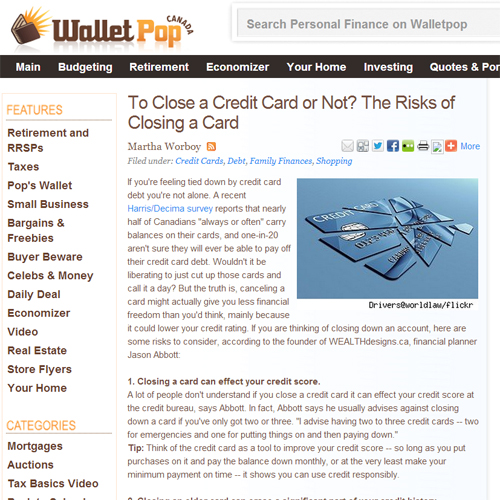 If you’re feeling tied down by credit card debt you’re not alone. A recent Harris/Decima survey reports that nearly half of Canadians “always or often” carry balances on their cards, and one-in-20 aren’t sure they will ever be able to pay off their credit card debt. Wouldn’t it be liberating to just cut up those cards and call it a day? But the truth is, canceling a card might actually give you less financial freedom than you’d think, mainly because it could lower your credit rating. If you are thinking of closing down an account, here are some risks to consider, according to the founder of WEALTHdesigns.ca, financial planner Jason Abbott:

1. Closing a card can effect your credit score.
A lot of people don’t understand if you close a credit card it can effect your credit score at the credit bureau, says Abbott. In fact, Abbott says he usually advises against closing down a card if you’ve only got two or three. “I advise having two to three credit cards — two for emergencies and one for putting things on and then paying down.”

Tip: Think of the credit card as a tool to improve your credit score — so long as you put purchases on it and pay the balance down monthly, or at the very least make your minimum payment on time — it shows you can use credit responsibly.

2. Closing an older card can erase a significant part of your credit history.
It is usually not best to close your oldest card with the greatest history, especially if your credit history is young (less than ten years). While you’re building up your history you don’t want a good chunk removed that could serve you well into the future. On the other hand, if you’ve got about ten cards with low limits — in the $5,000 range — then you will need to think about closing some strategically, says Abbott, though he always advises asking yourself if you have sufficient credit available to you before closing any cards.

Tip: It’s better to have fewer cards with a higher limit on each than a lot of cards with lower limits. At the end of the day, when a credit score is computed a key factor is utilization: how much of your current credit are you using? If you have two cards with a $25, 000 limit and you have $2, 000 on each, your utilization is excellent.

3. You might not be able to get the credit back.
Before closing any cards you want to make sure you have credit elsewhere. Think about other ample credit available to you before you close a card since, Abbott warns, when you really need credit no one wants to give it to you. And it won’t look favorably if you cancel a card and three months later apply for another card. An example of when to keep a card?
If you have three cards, and two are maxed out and you’re considering closing the third, Abbott advises to keep it open with a zero balance. If you close the third, you’re limiting the credit available to you, Abbott says. Plus it could very well lower your credit score since out of the three cards you may be at 80 per cent utilization.

Tip: If you decide to cancel a card, Abbott says you should carry a zero balance on the card for a few months before closing. Contact customer service, get an acknowledgment of the cancellation in writing, then get your credit history six months after closing the account to make sure it’s accurate and up to date (you can get a free credit history through Equifax).