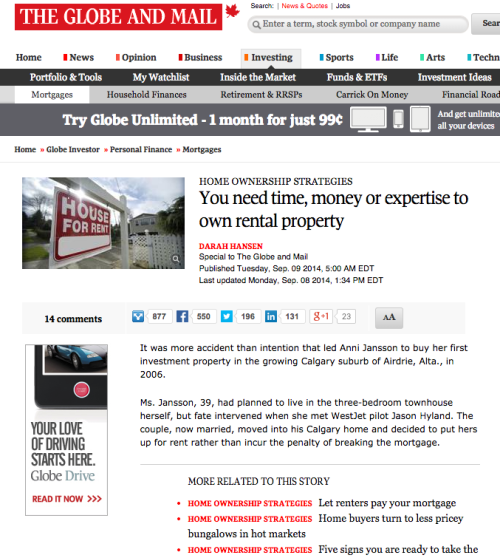 It was more accident than intention that led Anni Jansson to buy her first investment property in the growing Calgary suburb of Airdrie, Alta., in 2006.

Ms. Jansson, 39, had planned to live in the three-bedroom townhouse herself, but fate intervened when she met WestJet pilot Jason Hyland. The couple, now married, moved into his Calgary home and decided to put hers up for rent rather than incur the penalty of breaking the mortgage.

It proved to be a good financial move. People were lining up for rentals at the time and Ms. Jansson, who works in sales with a local residential development firm, quickly calculated that she could ask enough in rent to cover all her property expenses and still pocket a couple of hundred dollars every month.

It wasn’t long before Ms. Jansson decided to jump into the market again. She now owns and manages three income properties in Airdrie, and is in the process of closing on a fourth. Her long-term plan is to own up to 10 properties and use the revenue generated to supplement her retirement.

“I don’t have a pension plan,” she adds.

Ms. Jansson is in good company. Thousands of Canadians rely on residential income properties, whether close to home or abroad, to help them feather their financial nests.

Done right, investors stand to reap big rewards over the long haul, industry experts say. But property investment can also come at a heavy price to those who aren’t prepared to learn the market and do the less-than glamorous work of a landlord.

If talk about housing bubbles gives you ulcers, or you aren’t willing to answer the phone at 2 a.m. when the tenants call to tell you the pipes have burst, then investing in real estate might not be right for you.

“It’s like any business that you want to enter. It’s all about time, money and expertise. If you don’t have the time, you at least have to have the expertise and you have to have the money to make it fly,” says Phil McDowell, a mortgage broker in Calgary.

For those who are considering investing in a rental property, there are a few basic rules to keep in mind in order to mitigate the risk of the deal turning sour, says Melanie Reuter, director of research for the Canadian branch of the Real Estate Investment Network (REIN), an investor advisory organization based in British Columbia.

The key is to look for a community or region that shows clear signs of growth and economic sustainability. Avoid one-horse towns whose existence are tied to a single company, no matter how tempting the sale price.

Ms. Reuter says Alberta continues to be one of the best bets for income investors in Canada. The provincial average price for homes sold in June was a record $407,166, an increase of about 6 per cent from June of 2013, according to the Alberta Real Estate Association. The national average price, by comparison, rose 7 per cent on a year-over-year basis to $413,215.

At the same time, Alberta’s rental vacancy rates are consistently among the lowest in the country. With a vacancy rate of about 1.3 per cent, Calgary rents average about $1,300 a month for a one-bedroom apartment, according to rentboard.ca. In Fort McMurray, renters can expect to pay upward of $1,900 for a one-bedroom.

Ms. Reuter says it is equally important for investors to have a clear idea of the true monthly costs, including mortgage, interest and property tax, as well as potential extras, such as garbage pick-up, water usage or strata fees.

She recommends those considering property investment should also set aside an emergency fund to cover repairs and maintenance, or unexpected vacancies.

Investors purchasing across the border or in holiday destinations away from home can expect to tack on another 10 per cent of total costs to pay for a property manager.

Many investors choose to save money by doing the management work themselves, but that comes with its own costs. Landlords should expect to put effort into finding good tenants, avoiding bad ones and fielding the overnight phone calls when something goes wrong.

“We’ve all heard stories of someone who had the tenant from hell,” says Jason Abbott, a financial planner and president of Wealthdesigns.ca Inc. in Toronto.

A real-estate investment fund may be a better option for someone who wants to be involved in real estate without having to manage a property or assume all of the risk, Mr. Abbott says. The one downside is that it can be a lot harder than more traditional funds to access your money should you need it.

“If the fund doesn’t hold enough cash, it has to sell something off … but that is going to be the same if I go out and buy a rental property myself,” says William Britton, a financial planner in Kingston with Marlin Financial Services Inc.

Mr. Britton recommends his clients treat property investment as they would any business. That includes hiring a tax professional to help them report an income property, including expenses, revenues and asset appreciation. Not reporting an income property can land an investor in hot water with Canada Revenue Agency.

“If you choose not to report, you are taking the chance you won’t be found out. If you are, it is not going to be pretty,” Mr. Britton says.

Securing a mortgage for an income property can also be complicated, says Mr. McDowell, who is also a director with the Alberta Mortgage Brokers Association. Mortgage rules require investors to have a minimum down payment of 20 per cent and to have proof through tax returns of the their income and assets. In most cases, it is important to have secure employment to prove you can cover a portion of the mortgage at any time.

“You should be able to demonstrate that you’ve got a reserve fund available to you should you have a major repair or if the tenant skips,” Mr. McDowell says.

Homeowners who are interested in an income-generating property, but don’t have 20 per cent to put down, may want to consider a basement or suite within their own home, he adds. A primary residence with a rental suite requires a 5-per-cent down payment.

A mortgage helper in the house can also increase the chances of getting a better return on your own property when it comes time to sell, and you won’t have to pay capital gains, Ms. Reuter says.

Ms. Jansson, meanwhile, says she is always on the lookout for a modern three-bedroom home near a school and transit. “That’s the sweet spot,” she says.

She does worry about the economy softening, but says her business plan is based on a worst-case scenario. The income generated by all three rental properties significantly outstrips expenses. The regional economy would have to suffer seriously before she would even break even.

“The rent would have to decrease by 40 per cent. It is not going to happen,” Ms. Jansson says.