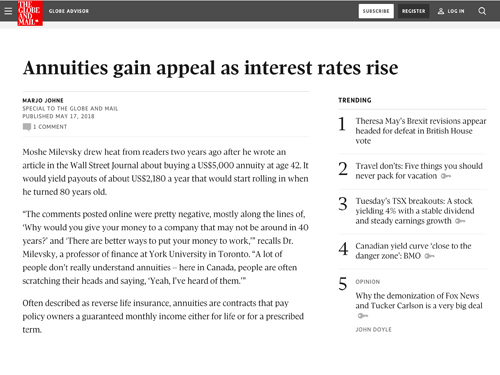 MARJO JOHNE
SPECIAL TO THE GLOBE AND MAIL
PUBLISHED MAY 17, 2018

Moshe Milevsky drew heat from readers two years ago after he wrote an article in the Wall Street Journal about buying a US$5,000 annuity at age 42. It would yield payouts of about US$2,180 a year that would start rolling in when he turned 80 years old.

“The comments posted online were pretty negative, mostly along the lines of, ‘Why would you give your money to a company that may not be around in 40 years?’ and ‘There are better ways to put your money to work,’” recalls Dr. Milevsky, a professor of finance at York University in Toronto. “A lot of people don’t really understand annuities – here in Canada, people are often scratching their heads and saying, ‘Yeah, I’ve heard of them.’”

Often described as reverse life insurance, annuities are contracts that pay policy owners a guaranteed monthly income either for life or for a prescribed term.

Unlike life insurance policies, which are paid for over a number of years, annuities are bought and paid in full upfront.

“If you buy a $100,000 life annuity at age 70 and you live to be 120 years old, you’ll continue to get your payments until you die,” says Paul Shelestowsky, senior wealth advisor at Meridian Credit Union in Niagara-on-the-Lake, Ont. “And if you have longevity on your side, at some point you’ll have used up your premium and you’ll be living on the insurance company’s dime.”

Once popular among Canadians, annuities – whose payouts are tied to interest rates – fell out of favour when rates plunged during the 2008-2009 financial crisis. Today, about 2.5 million Canadians own individual annuity policies, according to the Canadian Life and Health Insurance Association in Toronto. An additional 5.5 million annuity policies exist within group pension plans.

With interest rates on the rise – nudged, in large part, by rate hikes south of the border – should more Canadians consider adding annuities to their retirement plan?

Ronald Sanderson, the association’s director of policyholder taxation and pensions, says interest rates shouldn’t be the deciding factor behind an annuity purchase.

Outliving one’s retirement nest egg is a serious concern for many Canadians, according to survey results released this week by CANNEX and the Washington, D.C.-based market research firm Greenwald & Associates.

Close to 45 per cent of Canadians aged 55 to 75 years old are worried about outliving their savings, the survey found. Not surprisingly, 80 per cent said they considered guaranteed lifetime income to be a highly valuable supplement to government-sponsored retirement plans.

Annuities may be the answer for Canadians who haven’t saved enough to fund all of their retirement years, says Jason Abbott, a certified financial planner and principal at WEALTHdesigns.ca Inc. But purchasers face a trade-off for the financial certainty afforded by annuities: With plain-vanilla life policies – which come with no add-on features – when the annuitant dies the insurer keeps any unused portions of the premium.

“Know that you are trading your capital for guaranteed income, and if leaving money for your heirs is important to you, then an annuity may not be the best way to create a base of steady retirement income,” says Mr. Abbott. “There is no residual value for your heirs.”

Annuity buyers should also remember that they’re locking in their money for good; that cash won’t be available for emergencies down the road.

“Another thing to keep in mind is that an annuity may not bring in the same level of income as a portfolio of investments,” says Mr. Abbott. “But it will kick off a stream of income you can bank on.”

An annuity should work in balance with the rest of an investment portfolio, adds Mr. Abbott. Because it’s a fixed-income product, an annuity could replace a portfolio’s bond component.

How much can investors expect to receive from an annuity? John Beaton, an annuity broker at Canadian Annuity Services in White Rock, B.C., says the payout rates vary among insurers and are based on factors such as the annuitant’s gender and age when payouts start.

On the CANNEX website, a recent comparison of annuities – with a 10-year guarantee to a beneficiary in case the policy holder dies within the first 10 years of the policy and a $100,000 premium – shows payouts ranging from about $390 a month for a 55-year-old male to more than $770 for an 80-year-old male.

Mr. Aronoff shares a good rule of thumb for figuring out how much annuity to buy: Make sure that, when combined with CPP and other income sources, the annuity payouts are enough to cover essential expenses such as housing, food and utilities.

“Some people will consider golf essential, in which case golf expenses should also be taken into account,” says Mr. Aronoff. “You need to ensure there’s enough money so you have what you feel is a reasonable quality of life.”

Mr. Milevsky says annuities are not for everyone. Someone with a company-sponsored defined-benefit pension already has a form of annuity and doesn’t need another, he says. Wealthy individuals unlikely to outlive their money won’t have much use for an annuity, either.

“But if, for example, you’re an entrepreneur running a small business and neither you nor your spouse has a pension,” he says, “and all you have to retire on is the $10,000 a year you’ll be collecting from CPP [the Canada Pension Plan], then you should go out and buy an annuity.”