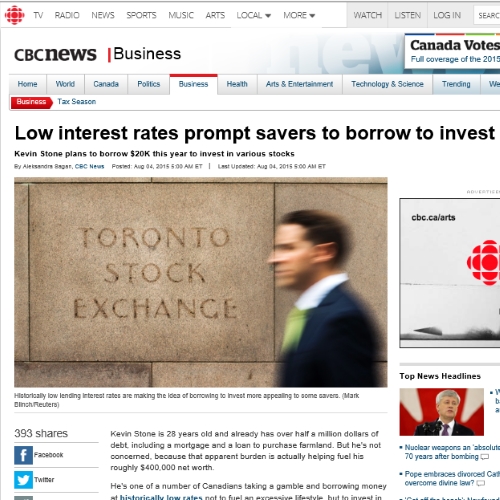 Kevin Stone is 28 years old and already has over half a million dollars of debt, including a mortgage and a loan to purchase farmland. But he’s not concerned, because that apparent burden is actually helping fuel his roughly $400,000 net worth.

He’s one of a number of Canadians taking a gamble and borrowing money at historically low rates not to fuel an excessive lifestyle, but to invest in the stock market. It’s a strategy one financial planner warns isn’t for everyone, and even seasoned investors can see things go wrong.

The Bank of Canada recently lowered its benchmark lending rate by 25 basis points for the second time this year. Canada’s major banks partially followed suit and lowered their prime lending rates to 2.7 per cent.

These changes caused the rates for already low variable-rate mortgages, as well as home equity and personal lines of credit, to fall.

The low rates prompted Harry, an Albertan in his 40s who requested his last name not be used for privacy reasons, to look at his $100,000 home equity line of credit, or HELOC, a different way.

He plans to use that money over the next several years to maximize his unused RRSP contribution room. He’s withdrawn funds from his HELOC before to pay for a few vacations, but this will be his first time borrowing the money for investments.

Harry plans to use his annual tax returns as large, lump-sum payments against the loan, while paying down the remaining balance at a low 2.2 per cent interest rate.

“I think the bigger risk is not using other people’s money to invest,” says Stone, who blogs about his money maneuvers at Freedom Thirty Five, where he doesn’t shy away from aiming to join Canada’s one per cent. “By taking on these debts today, I can have a longer time to build up my assets.”

Plans to borrow $20K this year

He’s shouldered tens of thousands of dollars of debt to help fund his stock market activity. Stone’s already racked up $60,000 in margin loans — they offer people money to invest using their shares as security — as well as pulled several thousand from his HELOC.

Stone plans to expand his HELOC limit by $9,000 and mine some other loan avenues to secure another $20,000 for investing this year.

Low lending interest rates are “absolutely” helping fuel his interest in this, he says.

“I’m continuing to make money that’s enough — more than enough — to cover the interest that I’m paying,” he says of the 3.2 per cent interest charge on his HELOC. For comparison, credit card companies typically charge around 20 per cent, but some rates edge as high as 30 per cent.

If interest rates climb above the return his investments yield, Stone says he’ll cash out some of his investment funds to repay his HELOC and other loans.

‘It can be a disaster’

While the strategy looks appealing on paper, it’s certainly not a good fit for everyone, says Jason Abbott, the principal financial planner at WEALTHdesigns.ca and a member of the Financial Advisors Association of Canada.

He’s borrowed money in this way before and his first attempt wasn’t too successful. He chalks it up to bad timing. Abbott invested the money in late 2008 “when the market had dropped substantially, but before it still had more to fall.”

Novices to investing are better off focusing on growing their net worth through more traditional methods, he says, because they don’t have the experience to handle this strategy.

A simple market correction can make the investment worth less than the loan, he says. Usually, a newbie will panic, sell and try to pay back the loan in another way.

Things can also go south if the person’s cash flow hits a setback and they can’t make their monthly loan payments.

“It can be a disaster,” says Abbott, who hears from investors who attempted this four or five years ago and are still “under water” trying to recover.

Stone hardly considers this a risky business for a seasoned investor like himself, but concedes this type of strategy may not be for everyone.

He compares investing risk levels for different people to those of driving. Consider the risk to everyone on a busy road, he says, if a car has someone without a driver’s licence behind the wheel versus a Formula One competitor.

The Lewis Hamiltons of investing don’t have much to worry about, he feels.

For some seasoned investors with a higher risk threshold who can weather a market’s ups and downs over an extended period this alternative strategy can work, Abbott says.

He would still urge them not to throw their entire available HELOC funds into the stock market, but rather start small with a diversified portfolio to gauge their comfort levels. He only invested “a small amount” back in 2008, which made his initial loss easier to handle.

Even when properly implemented, this shouldn’t make up the core of an investment plan, he says. There’s always the chance things will not turn out as planned.

Tim Stobbs, an engineer and personal finance blogger who has a $100,000 HELOC and $12,000 personal line of credit available to him, takes this more conservative approach.

Tim Stobbs uses his HELOC to free up cash for help purchase investments, but he always pays it back within about three months. (Tim Stobbs)

“It did occur to me with these dirt cheap interest rates that I could go ahead and just pre-save a full year worth of investment in one fell swoop,” he says. But, he doesn’t want to go down the “slippery slope” of borrowing from his HELOC too much.

The most he’s ever withdrawn from his six-figure HELOC is about $5,500 — the former contribution limit for a tax free savings account.

It happens occasionally when a stock he’s watching becomes more affordable. He’s always paid back the borrowed money within a few months.

He’s not comfortable borrowing from a line of credit for any longer and recognizes people who make this system work to their advantage need to be in it for the long haul.

“I don’t ever want to be in the situation where I’m forced to sell something to pay off part of a line of credit.”