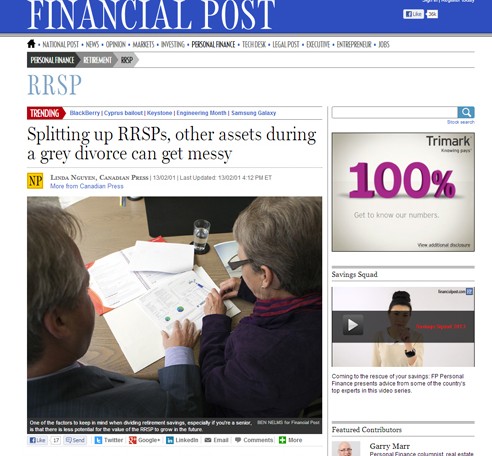 TORONTO — Dividing assets during a divorce can be a complicated and emotional process, especially for seniors who may not have planned on spending retirement alone.

Financial experts say like in any separation, one of the most trying aspects for those going through a so-called grey divorce is agreeing on how to split the family’s assets – which can be anything from a shared home to an RRSP account.

“What happens is that the average couple develops an accumulation of assets to fund their retirement,” said Jason Abbott, a member of the Financial Advisors Association of Canada with a private practice in Toronto.

“Invariably, if you chop those in half and expenses that used to be shared between two… are now borne by the individual, now you have to take a major step back. Now, all of a sudden, your nest egg isn’t going to go as far as it used to.”

According to the most recently available statistics, silver separations are an increasing trend.

Abbott said dividing an RRSP is as easy as signing the paperwork, but can get complicated if the two sides can’t agree on how much each partner should get – especially in situations where one person was the main breadwinner.

“The fact that on paper, one client is technically the owner, the registration is in their name, doesn’t discount the other spouse from having entitlement on that asset,” Abbot explained.

One of the factors to keep in mind when dividing retirement savings, especially if you’re a senior, is that there is less potential for the value of the RRSP to grow in the future. You no longer have the benefit of waiting out decades of investment appreciation and compound growth to fund your retirement.

That’s why having knowledge about shared finances is one of the best ways to make sure you get your fair share, he said.

“Both spouses need to know without question, where do we stand? Similarly, what are our assets?” added Abbott.

Elizabeth Taylor, an advisor with Sun Life Financial in Calgary, says she’s been seeing more and more instances of silver separation in the past few years.

“When you’re married and raising kids, you’re preoccupied but when you get into retirement, you’ve got two people in the same house – either you’re going to go through that smoothly or not,” she said. “Their needs and their goals are different.”

Taylor said people should try not to get too emotional when dividing assets during a divorce, because they need to look realistically at their cost of living and determine whether they can sustain their lifestyle once they’ve split up.

Couples going through a divorce should also take into account other valued assets like pensions, group benefits, and high-priced items like vehicles and homes, she said.