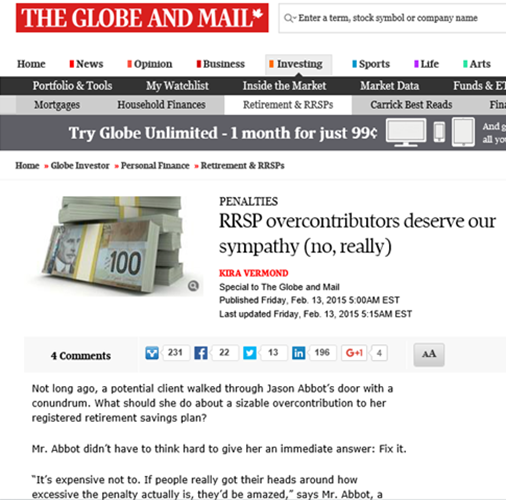 KIRA VERMOND
Special to The Globe and Mail

Not long ago, a potential client walked through Jason Abbott’s door with a conundrum. What should she do about a sizable overcontribution to her registered retirement savings plan?

Mr. Abbott didn’t have to think hard to give her an immediate answer: Fix it.

“It’s expensive not to. If people really got their heads around how excessive the penalty actually is, they’d be amazed,” says Mr. Abbott, a Toronto-based certified financial planner and president of WEALTHdesigns.ca Inc.

Maybe overcontributors are not keeping track of numerous RRSP accounts, or they forget they belong to their employer’s defined benefit plan, a defined contribution plan or a deferred profit sharing plan, which diminishes RRSP contribution room.

Now let’s say some of these overachieving savers know the 2014 maximum – $24,270 – but don’t read their tax assessment, which lists their actual (read: lower) personalized amount. They could wind up exceeding their RRSP deduction limit.

“They just don’t track their numbers and see where they stand,” Mr. Abbott says.

In other cases, new Canadians or those working in the country for less than a year get caught overcontributing since RRSP contribution room is based on the prior year’s income. If you didn’t work in Canada in 2013, you can’t contribute in 2014.

Luckily, there’s a $2,000 cushion. In other words, there’s no tax penalty on the first $2,000 of excess contributions no matter why the deposits happened. That’s welcome news if someone has made a math mistake, got a little overaggressive with savings or forgot about their employer plan.

Anything above the $2,000 amount? You pay one per cent tax on the excess amount each month, and there could be other interest and penalties too.

One per cent might not seem like much, but over time, the tax can take a big bite out of investment growth. Just consider what would happen if you overcontributed $12,000 to your RRSP. The first $2,000 gets a free pass on the penalty, but the other $10,000 would cost $100 the first month and every month. One year later, you’re looking at a $1,200 tax bill.

“That’s still 12 per cent over the year. You’d have to do really well investment-wise to overcome that penalty,” says Bruce Ball, a chartered professional accountant and national tax partner for BDO Canada LLP, in Toronto.

The problem, he explains, is that if an investor doesn’t realize his or her error, the Canada Revenue Agency isn’t necessarily going to spot it either. At least, not right away. In the meantime, the penalties continue to mount.

There are, however, mechanisms to get the tax waived. Basically, the CRA wants to know that the excess contribution was an inadvertent error and that you’re doing what you can to fix it. So pull the money out as soon as you notice the problem. If you do it in the same year or the following year, the CRA will be more likely to conclude that you simply made a mistake.

In another scenario, you’re less likely to be charged the penalty if the contributions were part of your qualifying group plan amount.

Think you need to pay the tax? File a T1-OVP Individual Tax Return for RRSP Excess Contributions to calculate the amount of the overcontribution and penalty tax. Just be sure to do that no later than 90 days after the end of the year in which you made the excess contributions.

Although there are ways to have the tax waived in some cases, don’t even bother pleading ignorance of the tax law. Judges have already thrown out such cases saying that ignorance can’t be considered the same thing as reasonable error. If tax forms confound and RRSP rules confuse, seek advice from someone who can explain them, judges have said.

Despite the penalties, RRSP overcontribution doesn’t keep Darren Coleman awake at night. The senior vice-president and portfolio manager for Raymond James in Toronto is far more concerned with excess contributions to tax-free savings accounts. Not only do they offer no wiggle room, so every extra dollar gets dinged with a 1-per-cent penalty tax, most people don’t understand how TFSA contributions work. That means it’s much too easy to go over the $5,500 maximum yearly limit.

For instance, if someone contributes $5,500 in June and then withdraws it in August, they must wait until the next calendar year before they can replace that money. But say they made another payment of $2,000 in September; they would have an $80 tax bill at the end of the year. (Four months at $20 a month.) What’s more, that extra $2,000 would eat into the following year’s contribution room. It’s a double whammy.

“Most people don’t understand the hokey-pokey of this thing. It causes all kinds of problems,” Mr. Coleman says. “At least with the RRSP the first $2,000 of overcontribution isn’t taxed. A TFSA? No. They get you on the first dollar.”