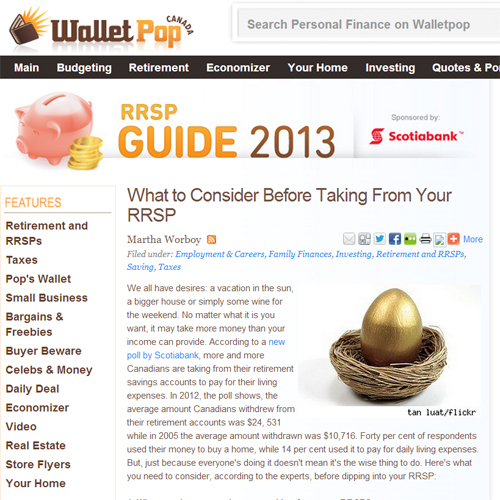 We all have desires: a vacation in the sun, a bigger house or simply some wine for the weekend. No matter what it is you want, it may take more money than your income can provide. According to a new poll by Scotiabank, more and more Canadians are taking from their retirement savings accounts to pay for their living expenses. In 2012, the poll shows, the average amount Canadians withdrew from their retirement accounts was $24, 531 while in 2005 the average amount withdrawn was $10,716. Forty per cent of respondents used their money to buy a home, while 14 per cent used it to pay for daily living expenses. But, just because everyone’s doing it doesn’t mean it’s the wise thing to do. Here’s what you need to consider, according to the experts, before dipping into your RRSP:

1. What are the pros and cons to taking from your RRSP?
Determining whether or not to take from a retirement savings account is an individual decision that requires an analysis of where you’re at financially, especially when it comes to your income level. You have to consider the pros and cons of taking from an RRSP, says Hatice Pakdil, a vice president and investment advisor at TD Waterhouse. You have to weigh cost benefit, says Pakdil, since you will be taxed at your tax bracket and if you’re in a high bracket you will still owe taxes on that money.

2. Will you be penalized because of the tax bracket you’re in?
According to financial planner Jason Abbott, founder of WEALTHdesigns.ca, what people need to understand is when money goes into an RRSP, it reduces income and when it goes out it is income, so putting the money in at a higher rate of taxation rather than pulling it out makes sense. If you pull money out when you are in a higher tax bracket, you’ll take a greater tax hit.  On the other hand, if a person has been downsized at work, or let go, and he’s not earning much and is therefore in a lower tax bracket, it might make sense to take the money out since he could have contributed when he was in a higher tax bracket.  “That’s how (RRSPs) are meant to be used,” says Abbott. “Being able to reduce income in higher earning years and pull it out as income in the lower earning years.”  The big thing Abbott stresses when it comes to RRSPs is it’s dollar for dollar — every dollar out is taxed like regular employment income.

3. Is this the last resort?
If you’re cashstrapped, unable to pay the bills and your only resource is your RRSP, it might be something to use but should be the last resort, says Pakdil. “If you’re a young person and you’ve got debt plus living expenses and you’re trying to pay it off — if you take money out of your RRSP, there will be tax on it but it will be a lower tax hit,” says Pakdil, who also says — though she doesn’t usually advise taking from an RRSP — less debt means more of an ability to save money.

4. Are you willing to lose contribution room plus the benefits of your money in a sheltered environment?
“You don’t get the contribution room back,” warns Abbott. “If someone did have a year where he got laid off and pulled out $40, 000 to cover living expenses, he won’t be able to put that back — it’s lost.”  Also, you’re forgoing the benefits of keeping your money in a sheltered environment since anything you earn on that money (in an RRSP) is sheltered, says Pakdil.  “You’re essentially undoing the structure of this savings vehicle by pulling it out, plus having a pension in retirement.”